UPDATE: We have just released two of these songs:  Hear them here

Step One: Pre-production - 8 March 2014 We recorded the guide tracks to a click at Harrie’s place weekend. They had been played as a whole band with the structure all worked out. Step Two: Set-up - 14 March 2014 We left Melbourne at 8:00pm. We arrived in Benalla at 11:30pm. Set the drums up in the lounge and clipped mics onto the snare, PG 57s, rack tom and floor tom, placed a mic into the bass drum and put two overheads above the kit; one directional (a Shure SM57), one condenser (a Rode MT1). Harrie set up his laptop with Logic and a Swamp Industries 12-channel mixer with six inputs. 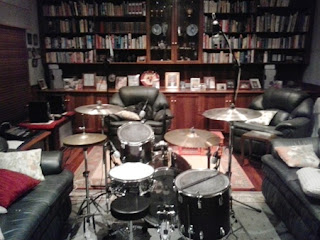 Step Three: Record the Rhythm Section - 15 March 2014 12:30pm – We padded the bass drum out a bit. There was already a sheet inside it. Harrie put a pillow inside the bass drum, and another one outside it, between the bass drum and the mic. Simon had replaced the bass drum skin two days ago, and the snare skin today. Both were brighter but the bass drum was echoing more. Each person who recorded was listening to guide tracks on the headphones. When we listened back after recording we listened through studio monitors. 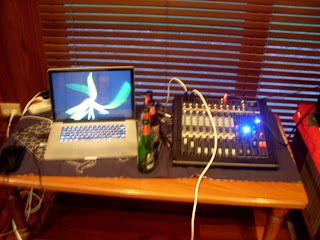 Drum Recording (Simon plays a Tama kit with Remo heads and Zildjian cymbals) 1:00pm Fool’s Gold Rush Recorded in three takes. We nearly went for the second take, then Simon decided he could do better. After running part-way through the song a few times, stopping, getting annoyed with himself, restarting and eventually finding his groove, he recorded the best take. The second take had been accurate, but the end result had more feeling and gusto. 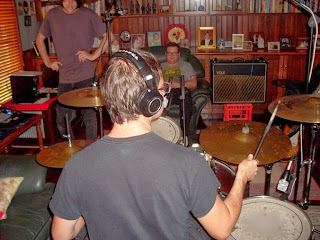 1:30pm Molotov Fairytale Recorded in three takes. One of the problems with recording to a click is when the songs change tempo. Simon re-recorded the ending two bars that slow down to a stop as a separate track. Harrie spliced the ending over the top of the previous ending, fading the first out and the new ending in. It worked seamlessly. After Simon had recorded the drums, Harrie over-dubbed the floor tom bit that he does in the break down. 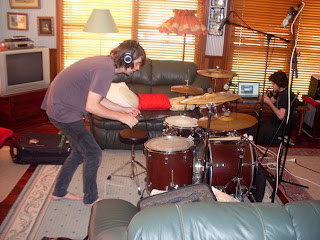 2:30pm I’m Strange Fairly straight forward beat. Simon recorded the beat in two takes. 3:30pm Passing By We knew this one would be tricky due to the tempo change. Simon got the main beat right after two takes. However, because when it slows down the click stops and the drum fill is free time, it was hard to overdub alongside the guide track. So Simon recorded the second part of the song at the slower tempo separately. Then he recorded the snare fill separately. Harrie spliced this into the recording. One problem here was that the original floor tom hit was cut off. So Simon hit a floor tom one more time, Harrie recorded it. Then spliced that hit on top of the last floor tom hit from the original take, so it rang on properly before the snare fill came in. Then we noticed that Simon had slightly rushed the break down with the two cymbal hits followed by six beat rolls. So Harrie played the recording from the previous break down, the one that has four single hit stops, then three doubles and a fill. Simon came in on the fill and played right up until the end of the floor tom hits, before the snare fill. It was spliced together and it had worked well. 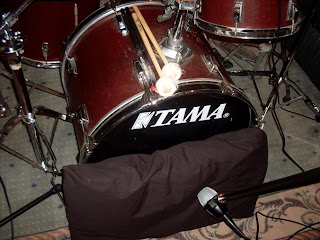 We sat and listened to all the drum tracks. Gordon played along on the guitar, and Harrie sang a bit. We all agreed that the drums were complete. Bass recording (Nathaniel plays a Fender Jaguar bass with an Ampeg PF500 with a Trace Elliot 1028H cab) We recorded the bass with one microphone input into the mixer from the bass cabinet and one output going from the amp head into the mixer. 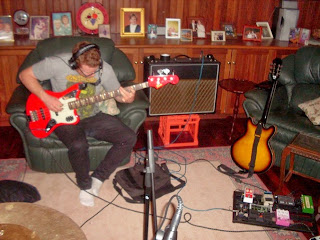 5:00pm Fool’s Gold Rush Nathaniel played the bass along with the drum track. He did not need to hear the click or the band guide track at all. After three takes he had it. The drums and bass were sounding locked in and tighter than a miser walking past a beggar. 5:40pm Molotov Fairytale Nathaniel recorded this along with the guide track, drums and click. For a simple sounding song, it’s deceptively simple. The starts and stops, much like tempo changes. Take concentration and precise timing. The click tracks can be handy in these situations. Harrie dropped Nathaniel in half way through the song so he could record the rest of it. He faded in and out as he did with the drums so it was a smooth transition. 6:10pm Passing By Nathaniel recorded this in the second take. 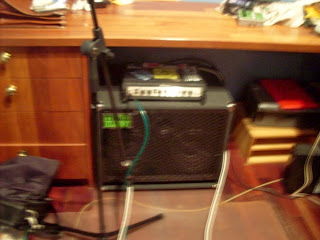 6:40pm I’m Strange Nathaniel recorded this in the second take. 7:00pm The All-important Dinner Break After a day of hard work, any sensible band stops for a meal to restore energy and have a break from the concentration. We had steaks, sweet potato chips and salad. It was amazing. After dinner… Rhythm Guitar Recording (Harrie plays an Epiphone Casino double cutaway hollow body guitar with a Vox AC30 amp) 8:30pm I’m Strange (Harrie) Similar to the timing issues Simon had, Harrie had trouble coming in at the start because of the way the drums came in. He had to record an intro that preceded the drums and have it sync up with the drums when they came in. After several attempts he got the timing right. Harrie used the Boss Space Echo effect pedal and an MXR 10 band equaliser to get the guitar sound. 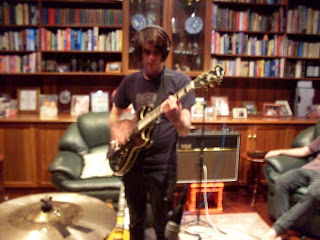 8:50pm Passing By (Harrie) This one took a few takes. We’re all perfectionists, and rightly so. As Billy Corgan said: ‘If you make a mistake live, it’s gone, but if you make a mistake in a recording, it’s there to be repeated digitally until the end of time.’ So each of us kept repeating our takes until we felt we had got through the song with the right notes, feel, timing and all the rest. We all on average get a song in two or three takes, so that’s not bad for perfectionists. Occasionally recording a difficult piece and inlaying it into the tune at the right point saves us from having to keep repeating the entire song just because of one small section. Gordon played each solo 3 times then Harrie did some flourishes over that. 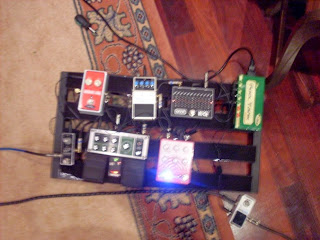 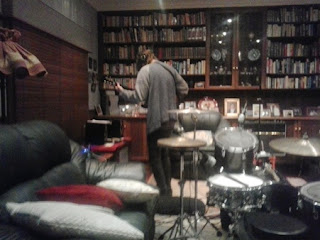 10:55pm Molotov Fairytale Rhythm guitar. Harrie and Gordon both through a clean amp. Gordon tried fizz but the sound wasn’t right. 9:00am 16 March 2014 We sat and had a listen to the night’s recordings to make sure they were all good. 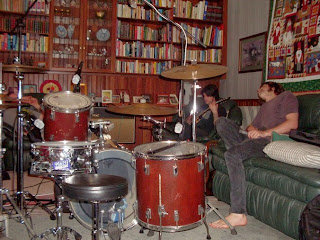 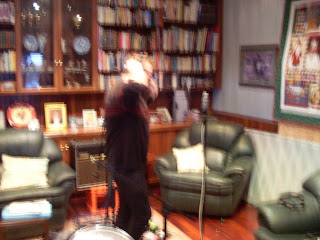 11:30am Harrie – I’m Strange After some warm-ups and a take, Harrie takes a food and drink break. We all took a lunch break. Harrie finished the vocals for I’m Strange in two takes. 12:30pm Harrie – Passing By. Vocals recorded in two takes. 12:45pm We sat down and had a listen to Passing By with the vocals. Then Fool’s Gold Rush instrumental. We had generally been listening to everything after recording it, to make sure it was good. We wouldn’t listen to a take until we thought that was ‘the one’ though. The guitars and tambourine were sounding fat and juicy. Some nice feedback at the end on the guitar track. 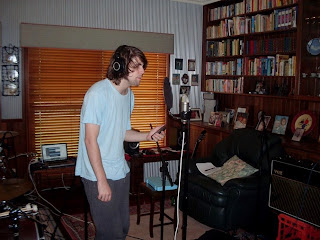 Step Five: Record the Embellishments We did some of this in between the guitar and vocal parts (the tambourine and glockenspiel). It was just a matter of convenience meets spontaneity. 1:00pm Gordon played tambourine on Molotov Fairytale 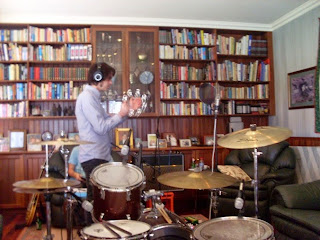 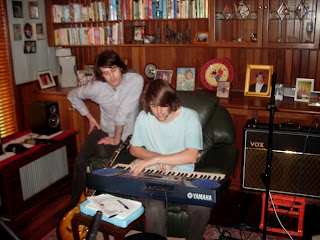 5:25 Gordon then Harrie recorded backup vocals for Molotov Fairytale
Step Six: Mix The first part of mixing is cleaning all the tracks up. You zoom in on all the tracks and look for all the quiet spaces, such as big section of no playing or singing. There may be some noise on these parts, such as breathing and background noise. You mute all these segments. Then you equalise each track, adjust volumes, amplify or even overdrive some tracks, add reverb, pretty much play around until it all sounds as good as you can get it prior to mastering. Harrie and Nathaniel spent long hours mixing the recordings. Almost daily they would email exported mixes to the rest of the band for a listen. They would in turn email back with feedback on the mix. Harrie spent the most time on this since the mixes were on his laptop. Nathaniel spent some time on weekends at Harrie's house helping. They've both got very good at this job. (We recorded the Dee Eye Why EP by ourselves and mixed it ourselves too. And you'll get to hear these recordings soon enough.) 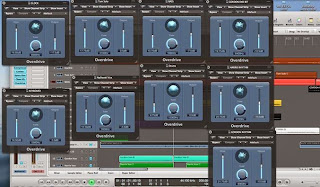 Step Seven: Mastering We emailed our final mixes off in WAV format to Crystal Mastering be mastered. At this point we have got the single available for free download at Bandcamp, and are giving out 'bootleg' CDs at our launch. We would normally get the CDs printed at Implant Media in Melbourne; we did with our first two EPs, It Goes Like This and Dee Eye Why.
Posted by Simon at 12:53 AM